By Sophia Ferlenda and Bess Murad 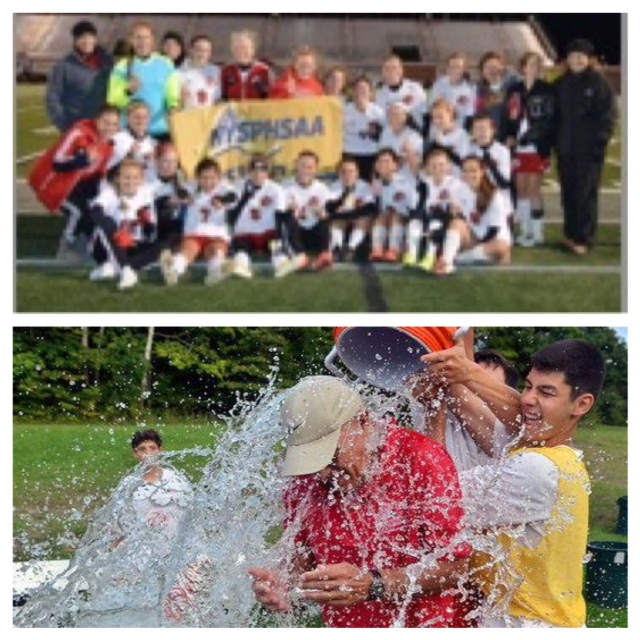 Both the Jamesville-DeWitt High School Varsity Boys and Varsity Girls Soccer teams made it to the state championship this season. Neither the girls nor the boys came out with a victory, but both believe that making it to that point was an unexpected accomplishment on its own.

The J-DHS Varsity Girls Soccer team stayed positive going into their state semifinal game, but knew it was going to be difficult because their opponent, Somers from Lincolndale, was ranked No. 2 in the state. J-DHS Varsity Girls Soccer Head Coach Hayley Nies scouted the team before hand and went into the game positive because she believed that J-DHS could match up with the skills of Somers.

The game remained 0-0 until J-DHS senior Erin Brinley scored a goal off of a free kick with 11:46 left in the first half. Senior Goalie Maddy Frank, had “awesome saves throughout the game,” Coach Nies said. Somers failed to answer the J-DHS goal until 8:29 remained in the second half.

Then with 5:47 left in the second half, a Somer forward went down in the penalty box, bringing down J-DHS midfielder Alex Epifani with her. Even though the foul wasn’t Epifani’s fault, a penalty kick was awarded to Somers. Somers scored off of the penalty kick which put them ahead 2-1. The call was extremely controversial and caused an uproar at the game. The J-DHS team and fans think that the Somers player fell on her own and took down Epifani with her. The referee is believed to not have been in an able position on the field to make the call.

Sophomore Cassie Durkin, a spectator at the state semi-final game, believes the call “took away J-DHS’s chance to win.” Durkin thinks that it should have been a no-call and the players should have been given the chance to go into overtime. “If the refs were actually smart and didn’t call that stupid play, then Somers wouldn’t have gotten that extra goal, which changed the outcome of the whole game” said senior Zach Gentile, a J-DHS student who attended the state semi-final game.

The team loses 10 seniors this year, but ended on a successful season with a record 21-1. “It was tough for the group of seniors, since they have played together for so long,” Coach Neis said. The players are still upset with the outcome of the semi-final game. Senior Emily Hauser, member of the J-DHS Varsity Girls soccer team wishes that they, “hadn’t gotten robbed out of a state championship.”

The J-DHS Boys Soccer team making it to states was an unexpected achievement for junior Dean Kousmanidis, “Only two boys soccer teams in J-D history have made it that far,” said Kousmanidis. “I think that we all had it in our heads that we were going to make it this far. The boys team had mixed feelings going into the state semi-final game. Kousmanidis and senior captain Xander Ferlenda went into the game confident, while other teammates, including sophomore Jake Brazie, were extremely nervous when they stepped onto the field. J-DHS knew that the team they were going to play, East Hampton, was a skilled team and that it would be a tough game. Assistant Coach Paul Krause believes once J-DHS settled into East Hamptons’ style of play, they began to perform to their full ability. The final score, 3-0, was a “fair reflection of the game,” Brazie said, because he believes that J-DHS was overmatched. However Coach Krause believes that J-DHS Varsity Boys Soccer team “fought until the end.”

“I was proud of the season, even if it didn’t end ideally,” junior Tyler Lux said. The team will miss its five seniors next year. Brazie said he will “miss seeing the team every day, because we were so close, and I will miss playing with the seniors,” However the team is looking forward to next season so they can have another successful year.