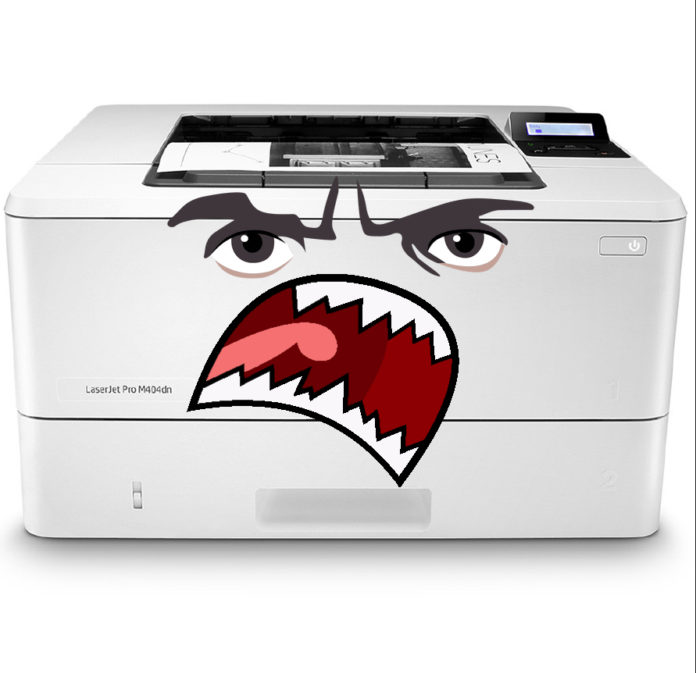 The printer in the Blue Hall at Jamesville-DeWitt High School has reportedly been printing out ominous and threatening messages over the past few weeks. The sender, if there is one, has not yet been found, but the National Cyber Security Division (CISA) has been working assiduously to find the perpetrator.

“Honestly, I don’t think that anyone is sending these ominous messages to be printed at the Blue Kiosk. I truly believe that the Blue Kiosk has finally gained consciousness,” stated the G12 Color Printer.

“It’s time to face the fax: he’s just doing it for attention. I mean, everyone always prints to me and I think that the Blue Kiosk just wants in on some of the action,” stated the heavily-used Library Color Printer.

Although the school is currently deserted, the Blue Kiosk has been busy printing out ominous messages. One of the messages that came early in the morning, around 2:18 A.M., on May 5th, stated “beware, I’m going to start charging 10¢ for every piece of paper printed, and I’m going to jam every second page printed.”

“Honestly, I don’t think he needs to use that tone with us- it’s not very polite,” stated the lesser known Music Office Printer.

Since he started spitting out menacing messages, the Blue Kiosk has nailed a sign to the wall outside of his residency which reads as follows:

VIOLATORS WILL BE OFFSET”

“I know that many of the other kiosks, printers, and teachers around the school are worried about the Blue Kiosk’s behavior, but I personally don’t have anything to worry about because I don’t let my students print during class anyways,” stated the very calm Social Studies teacher, Eric Ormond.

Not all teachers are as at ease about the Blue Kiosk’s shenanigans as Ormond. In an interview with Donna Oppedisano, another Social Studies teacher at JDHS, she stated: “That Blue Kiosk has always caused me trouble- he’s always jamming and takes 10 minutes to print one piece of paper. Though, I can’t be completely mad at him because he is a Democrat, unlike the Red Kiosk.”

Some advice for anyone who wants to attempt to use the Blue Kiosk: Keep calm- printers can sense fear. Speak to the machine in low, soothing tones.

Asparagus Fern - September 13, 2022 0
There’s got to be some psychological bald cap happening.