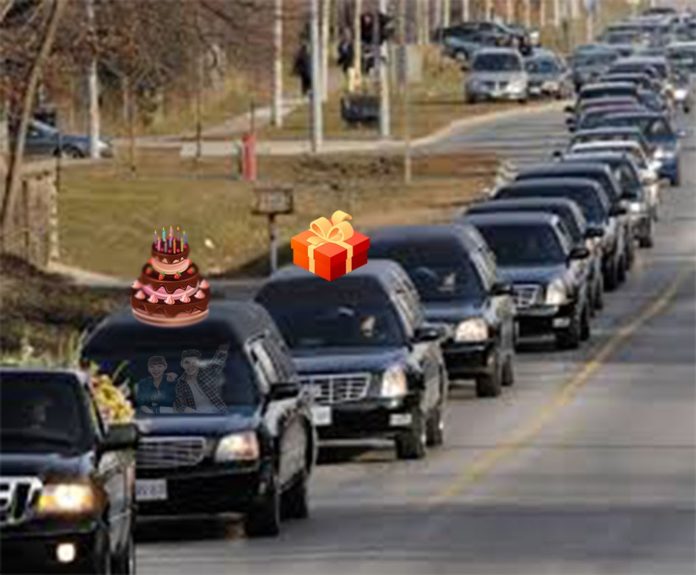 Once every 365 days we turn one year older. This is normally celebrated with a party, cake, and hanging out with friends. However, once again, Coronavirus is ruining it. With the social distance order in place, teens have taken to driving to their friend’s houses and saying “happy birthday” from their car. What these people have not taken into account is the more melancholy tradition of the funeral procession.

Once someone passes on, family and friends drive along in a line to the funeral site where the ceremony takes place. This is more commonly known as a funeral procession. On April 28th at 5:03 pm, a Junior had a birthday parade come to their house. While this is a nice gesture, a police cruiser saw the long procession of cars and decided to escort them. He headed to the front of the line and asked for the address. When given, he turned on his lights and went ahead of them, clearing the way.

Once they arrived at the Junior’s house, the Police officer realized this wasn’t in fact a funeral procession but a quirky birthday parade. You may see this as an anomaly, but it has been becoming ever more common in the past few months. Below we have an interview with a sophomore student who received one of these parades:

D: What exactly was going through your mind when you saw a police cruiser pull up to your house?

A: I was quite concerned actually, that’s never happened to me. I was a bit more relieved when I saw all my friends behind him, though.

D: How do you feel about birthday parades in general?

A: I think it’s a really kind gesture, especially in these times, but I think that not all the cars should be black.

D: I agree, a single line of black cars could easily be taken as something else.

A: Yeah, but anyway I have to go. I have three more labs due for Comfort, strangely all are about lizards…

D: Quite strange indeed, thank you for your time.

Overall, I guess if you are going to participate in one of these birthday parades, make it clear that you are not going to a funeral.