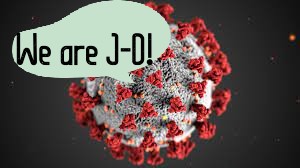 Over Spring Break, the red rams announced their retirement as mascot of the Jamesville-DeWitt School District, another huge hit to the J-DHS community following Mr. Gasparini’s retirement announcement less than a month ago. Replacing the rams as mascot will be the omicron subvariant BA.2.12. This change, however, has caused some controversy. While some are calling it a district-wide revamping, others are calling it foul play.

“It was time for the red rams to retire,” Dr. Smith told us calmly. “When they approached me about their retirement—which was a completely unsolicited exchange, totally unsolicited—I was sad, like all of you. But you have to remember that the rams have been the J-D mascot since the very beginning. That’s a long time. We here at the district office were starting to think that maybe it was time for something new; something more… chic. It’s time for us to revitalize the J-D image.”

In search of trendy, but local mascot candidates, Dr. Smith initially tried to recruit Buddy Boeheim, however, when presented with the Name, Image, and Likeness bill, he realized he’d have to cut the JV football program (along with the entire district’s English department) in order to afford it. However, unexpectedly, BA.2.12 came knocking at the door and Dr. Smith couldn’t help but give the omicron subvariant an interview.

“We needed something new,” Mr. Gasparini said, “to match our changing world. Something that would put Jamesville-DeWitt back on the scene. I mean, I was personally rooting for Buddy—I was willing to make those sacrifices—but BA.2.12 has the spark of youth and unpredictability we’re looking for. Its level of school spirit at the interview was truly contagious. Other Onondaga County school districts are jealous that we were able to snatch the variant up, but what can I say? We are J-D.”

However, while the administrators are thrilled by the new hire, others are not as happy.

“I was walking my dog over break when I saw the red rams leave,” one junior said. “They walked straight down Edinger Drive and, believe me, they did not look like the ones who had initiated the retirement process.” Residents along Edinger Drive reported to the police observances of an “angry, red mass” moving down the street, and “aggressive hoof clomping and rumblings” heard during the lunch hour.

“This is all a big, fat scam,” one sophomore said. “The district obviously forced the red rams to leave against their will. And for what? Do they think being the first school district to have a life-threatening, highly contagious virus subvariant as their mascot will suddenly make them the envy of the country? Come on.”

“It’s outrageous,” a senior said. “The red rams have been J-D’s mascot for as long as I can remember, for as long as my parents can remember! You can’t just throw away that history for— for some COVID newbie! Try to infect us all, you might, but I’m not going to catch it. I am and will always be a red ram.”

While many students and staff haven’t noticed the change in mascot due to end of the marking period grades and the usual obliviousness, the district has already hired a construction crew to begin building a monument for BA.2.12 (in honor of the subvariant first being confirmed in the U.S. here in Onondaga County) right in the center of the library.

Dr. Smith proudly boasted to YamPage about the efficiency of this construction project; it is set to begin on May 4. Or, as many J-DHS students know it: the first day of AP exams.

Jimothy Rivers - December 20, 2022 0
The ultimate goal of this school district should be the safety of children, and the best way to ensure that is to have a man with a gun follow them around 24/7.