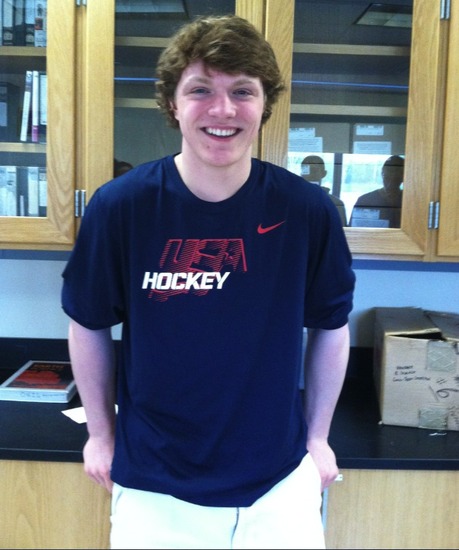 If you ever happen to bump into freshman Luke Kirwan in the hallways at Jamesville-Dewitt High School, he will beat you. Before you think about saying sorry, the 6-foot, 2-inch freshman will already have beaten you to it. You would never think a kid with such a humble personality could succeed as a forward in the Eastern Junior Hockey League. Don’t let him fool you. Kirwan was a predominant factor in the Islanders Hockey Club’s 2013 season and has been the best player on his team since second grade.

You may be wondering why Kirwan wasn’t the best player on the JD/CBA Boys Hockey team, or where he was when they were on the road to winning the state championship. Kirwan spent hockey season, and much of this school year, in the small town of Groton-Dunstable, Mass., playing for the Middlesex Islanders which is one of the elite teams in the EJHL. With the Lighthouse rink, the home ice of the Islanders, right down the road, Kirwan was never too far from the only enjoyable part of his stay in Massachusetts. “The only time I had, to do what I wanted, was when I was playing hockey,” said Kirwan. “I stayed with a family that had no idea how to house me, and the kids in Mass. were really different,” he said. Virtually alone in his new town, Kirwan’s humble personality helped him fit in in his new school. He found that with time, things got much easier. “Once school started to get more fun, I felt better at home, and played better on the ice,” said Kirwan.

At the tender age of 3, Kirwan started to play hockey, the sport which was the backbone of his future success. Just as every athlete does, Kirwan struggled at the beginning. “I hated hockey, I wanted to quit, I was absolutely awful,” said Kirwan. “My dad is the only reason I didn’t quit. He forced me to see my true potential,” said Kirwan. Kirwan owes much of his success to the time and effort his family put in toward his hockey career. “My dad takes me everywhere, If I’m not at practice, I’m at a tournament, if I’m not at a tournament I’m training,” said Kirwan. “It’s time consuming. I couldn’t do it without my family,” he said.

For an athlete like Kirwan a tournament isn’t always a day trip. Kirwan has played hockey in over six different states, including Florida, Pennsylvania, New York, Michigan, Massachusetts and two of the six provinces of Canada: Ontario and Quebec. Why would anyone want to spend so much time traveling for a sport? Knowing the key to his goal of someday playing in the NHL could only be achieved with exposure and practice helps Kirwan accept the travel. “No one can go far in any sport without going to the next level, and you can’t get on next level teams without being picked,” he said. “The exposure I get from traveling, and the amount of teams that see me play all help me toward getting (picked and so getting) to the NHL,” said Kirwan. Not only does Kirwan need the exposure to further pursue his hockey career, Kirwan also gets to see teams and players who possess skills Kirwan needs to learn in order to step his own game up. “Players in Canada play different than players in the U.S and the same goes for state to state,” said Kirwan, “Its good for me to see every type of play.”

State to state, tournament to tournament, Kirwan has always felt at home on any team. He never had trouble with his teammates. A perk to starting his career with friends from J-DHS, is that Kirwan always knew he was skating alongside kids who were not only playing to win, but playing to help him succeed. Playing with these guys helped Kirwan learn to play out of his comfort zone, because he knew his friends would always have his back.

When playing for the Syracuse Stars Hockey club Kirwan had the chance to explode past competition while skating along side faces familiar in J-DHS. “I got the pleasure to play with Kirwan on the Stars for a few years,” said sophomore forward for the J-D/CBA Boys Hockey team, and Section III player of the year, Ryan Durkin. “The kid was always the best on the team, and when we were winning, he was the best on the ice,” Durkin continued. “His hustle and drive is unmatchable,” said Braeden Doust, sophomore forward for the J-D/CBA Hockey team. “I remember, If we ever needed a goal, (on the Nationals) he was the go to guy, but he could also dish the puck out. The kid is an all-over player,” said Doust. An all over player is someone who is good in all aspects of the sport, fundamentals, physical ability, and knowledge of the game.

Not only did Kirwan succeed playing with kids he grew up with, Kirwan had a luxury most players never get to have. Kirwans biggest supporter, and motivator off the ice, was also his coach on the ice: his dad. “I had to play well. I couldn’t escape the constant pressure to play my absolute best, and when I wasn’t, he would let me know,” said Kirwan.

That constant pressure paid off, and is evident in the fact that Kirwan is now a member of the 2014 U.S National Hockey Team, and was picked 32nd overall in the Ontario Hockey League draft. The OHL, is one of the three Canadian semi-pro hockey leagues. “It’s not even a big deal to me; making the OHL draft was a given,” said Kirwan. Kirwan is happy about making the OHL draft, but he is using it only as a stepping stone toward his true dream of playing in the NHL.

A Year in Review

Girls Soccer Falls Short at the End of a Strong Run