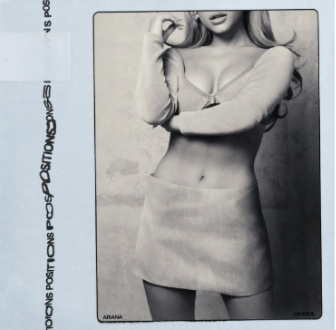 American pop star and songwriter Ariana Grande hit her fans with the sixth album of her career titled “Positions” on Friday, October 30th. The single “Positions” was released a week prior to get fans excited about the album drop and it certainly did not disappoint. The album includes 14 songs with titles such as “shut up”, “motive”, “obvious”, “pov” and more titles that showcase Grande’s journey as a successful young woman but also her values of self-worth and the love she gives to others.

The eye-catching designs on the cover album of the positions single give off a retro vibe with the font but a modern take with the use of bright blue as the background color. The image of her outfit is striking and catches the eye right away. The music video simply does not fall short of this theme with the use of darker coloring and Grande’s 60’s inspired hairstyles. The overall message of the video is that she is a working woman but still can be there for her partner who she loves very much. This resonates perfectly with the messages displayed in the rest of the album with the lyrics “know my love infinite, nothing I wouldn’t do.” As far as the album cover for the complete album, it gives the same type of consistency in the aesthetic with a close up picture of Grande’s face with a black and white filter with a little bit of more grainy and vintage look. Fans can also purchase limited-edition versions of the CD on shop.arianagrande.com along with merchandise. The merchandise that fans can purchase match perfectly with the album cover and have a variety of different designs and colors in sweatshirts, crewnecks, short and long sleeve tees, socks and even face masks perfect for staying stylish in a global pandemic.

Each song in the album tells a story which is what makes grande’s music resonate with so many people. The songs in this album come full circle from Grande’s “thank u, next” album that came out in early February of last year. In the song “ghostin’” on the “thank u, next” album Ariana subtly slides in the lyric “a whole lotta baggage” meaning she had a lot of things going on in her life that she wasn’t necessarily in the best place. Now this line can make a connection to the song “pov”, Grande contradicts that statement with the line “all my baggage fading safely” which shows her growth as a woman between the two albums. Many songs in the album also make references to Grande’s former partner, Mac Miller who tragically passed away in September of 2018 due to an accidental overdose. In the song “off the table” Grande sings about wondering if she will ever love anyone the same way she loved Miller with her current partner. With lines like “will I ever love the same way again?/ Never thought you’d be so hard to replace” that ode to her love of Miller, listeners can tell that Ariana is still in the process of grieving but also working on opening her heart to her current partner Dalton Gomez. Another reference to the late Mac Miller comes from the song “just like magic” which expresses Grande’s journey of manifestation and self-reflection in the lyrics “take my pen and write love letters to heaven.”  Although the album showcases lots of nods to Grande’s former partners, it also expressed Grande’s love towards her current boyfriend and their connection in songs such as “positions”, “west side”, and “safety net.”

The album gives listeners some special guest appearances from popular artists. The collaboration “motive” features hit singer Doja Cat and feature both artists in a way that is unexpected but works better than one could imagine. Doja Cat is best known for rapping and her hip-hop style songs and Grande is famous for her elegant voice and precise high notes which is exactly what is mixed in this song that makes it work so well. The popular singer formerly known as The Weeknd also makes an appearance in the song “off the table” that is about falling in love with someone you don’t expect to at first. The final collaboration on this album is with rapper Ty Dolla $ign on the song “safety net” which blends both artist’s styles in a way that without a doubt will take listeners by surprise.

Grande did not hold anything back in her sixth album that is already taking over the United States Top 50 charts, Apple Music’s Top 100 Global charts, and Apple Music’s Top 100 USA charts. Between the use of her new R n’ B sound, the messages in her songs, the aesthetic of the cover art, and the breathtaking collaborations that make this album one of a kind, if you haven’t listened to it yet you’re simply missing out.

Past and Upcoming Syracuse Concerts in 2021

The 10-Year Anniversary of the Musical Template for Your Favorite Modern...