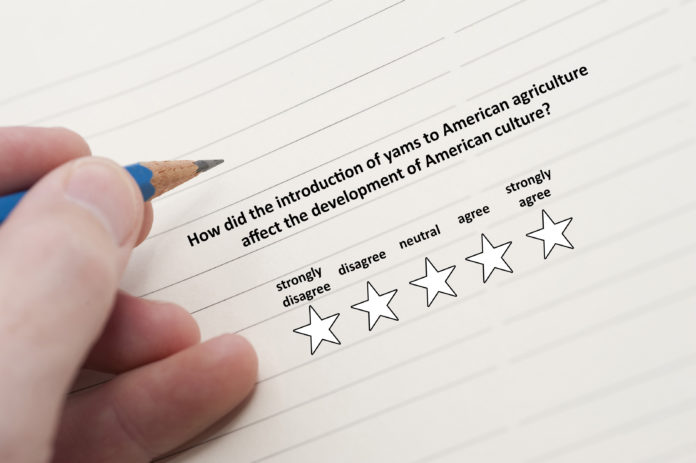 As AP weeks come to a close, students have reported something odd about the exams. While many have brushed it aside as College Board just trying to be “trendy,” those who actually participated in the ThoughtExchanges this year have noticed eerie similarities.

On test day, students were not greeted by multiple choice sections or long essays, but instead were given a five star scale from “strongly disagree” to “strongly agree” and were limited to just 300 characters for free responses.

“I did all of the practice multiple choice for AP Stats on AP Classroom. Literally every single one. And then they throw the curveball of asking whether I strongly agree, agree, disagree, strongly disagree, or am neutral concerning the mean of a data set? What?!” AP Statistics student, Tara Pollock, exclaimed before taking out her phone to calculate her score on Albert.io again.

“Okay. It’s my fault that I didn’t actually write a practice DBQ before the test,” one AP U.S. History student said. “But I could’ve sworn Heimler said that it was supposed to be a four or five paragraph essay, not just 300 characters. How in the world is someone supposed to write about the relative importance of anything in only 300 characters?!”

Having heard the rumors about the new test format, the abnormally large portion of students who had to take make-up exams took the opportunity to prepare for this new format by obsessively participating in the Wellness Supports and Initiatives ThoughtExchange to hone their skills.

“I think, technically, I wasn’t supposed to enter myself into the ThoughtExchange 103 times, but I heard it was the only way to study,” AP Language and Composition student, Connie Zhang, said. “It took some time, but I think I successfully mastered the art of the 300-character rhetorical analysis essay.”

While the Board of Education was angry that their ThoughtExchange was flooded with totally irrelevant 300-character “essays” with topics ranging from world history to physics, students and teachers were overall pretty happy about the change.

“I think this shift has really helped College Board move more toward the modern age,” AP Literature and Composition teacher, Mr. Phillips, said. “Kids these days often don’t have the kind of endurance to write a five paragraph essay. But 300 characters? That’s about the length of a rambling text message.”

“I knew spending hours upon hours on ThoughtExchanges this year would eventually turn in my favor. I was initially worried about the multiple choice sections on the APUSH exam because I’m insanely indecisive and zoned out during like 80% of the class, but when it comes to having a strong opinion on history? I’ve got it in the bag,” AP U.S. History student, Anka Chiorini, said.

Now, students just have to wait and see what the Regents exams have in store for them. Will they get a break with a 300 character cap on free response questions, or will they be met with hand cramps and ink-stained hands?

Aveline Chocolat - September 13, 2020 0
Schools all over the world are having to rethink how they run and JD superintendent Peter Smith has a unique plan for the coming...