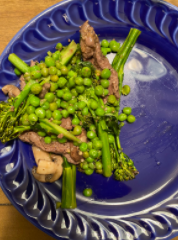 It’s the new year, a time where people feel the need to better themselves in a variety of different ways. For many, people try their best to get in shape, move around, and eat better, whole foods. For others, it’s finding a hobby, or life skill to better them for this year. In either case of what your resolution could be this year, this recipe fits the bill for both. This skillet steak recipe is a fairly quick and simple healthy meal, with loads of flavor that will tickle your taste buds.

For this recipe you will need the following ingredients…

-1 tablespoon of whole-grain mustard (I just went with what I had on hand, which was spicy mustard, and it still worked out beautifully)

-Begin by preheating your oven to 350 degrees

– Next place your cast iron skillet over the stove, set on medium heat and pour in your canola oil

-Add in your steak and broccoli rabe to the skillet, and let cook for around 4 minutes. During those 4 minutes make sure you turn the broccoli over once, but leave the steak alone

-Add in your peas, around the steak, and place the skillet in the oven for 8 minutes, which will cook your steak to roughly a medium-rare doneness.

-Remove the steak and vegetables from the skillet, and cover them in a separate pot.

-In your now free skillet, add in your mushrooms to the juice left over on the skillet from the steak. Cook for about 3 minutes, while stirring occasionally

– Add in the beef broth, cornstarch, mustard, and salt to the mushrooms, and stir

and vegetables, then it’s ready to serve

Overall, I thought this recipe was amazing! The steak was perfectly seasoned, and was tender and dripping in juice, what more could you ask for from a steak? The vegetables had a delectable and rich taste from baking in the steak juice. The mushroom sauce added a well pairing taste on top of the steak, not overpowering the meat, accentuating it more than anything else. Not only was the end result phenomenal, the process was quite short and sweet. In total it took me around 30 minutes to prepare this entire meal. There was not too much effort to put into this recipe, most of the work is simply placing the ingredients in the pan at the right time, which makes this a perfect recipe for any beginner to try.

This recipe serves practically 4 people, depending on the servings you take, and is perfect for meal prepping for dinner another night.

And if you’re not much of a steak person, or prefer different vegetables alongside your meat, you can easily swap out the steak for almost any other lean meat options.  The vegetables can be switched for pretty much any other vegetable you’d prefer.

Tips I picked up while cooking…

While making this recipe, there were certain things I realized should have been mentioned in the recipe, but just weren’t. Here is what I found should be fixed a little.

-Before you start cooking, cut you steak diagonally into thin stripes

-You would be much better off using regular broccoli instead of the rabe, it got very difficult to fit all of the broccoli rabe in the skillet with the steak, plus it’s more expensive, it’s best just to stay time and money.  -When cooking the steak, I left it in the oven for 10 extra minutes. The 8 minutes did not cut it, the steak was still pretty raw in certain areas and not much juice was visible. Instead of leaving it in the oven longer, it might also work to flip the steak in the pan while it’s cooking during those 4 minutes with the broccoli.

Nickelodeon Nostalgia: How Netflix is Bringing Back Our Childhood Through TV...