RamPage
Home YamPage “All I Want for Christmas is You” to be Played on Intercoms... 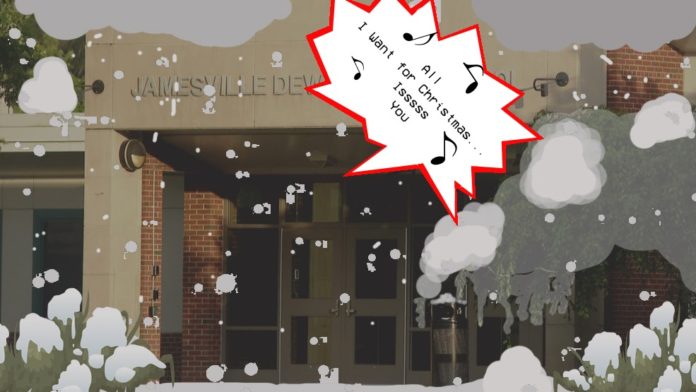 NOVEMBER 6th- Students entered JDHS thinking it was going to be a normal day at school—or at least as normal as normal can be at a time like this. However, just like in Biology, they were wrong. First, they saw snow as they looked out of their windows. Most didn’t think anything of it; we live in Syracuse. Next, upon entering the school, they noticed that all the teachers were wearing Christmas sweaters; November is a bit early, but that’s not the biggest deal or the strangest thing they’ve seen all year. Then, it hit them.

As junior Teddy Todorov entered through the main gym doors, he heard the glockenspiel and then Mariah Carey’s voice settled in on the iconic run that every retail worker dreads. Overcome with emotion, Todorov turned around and exited the building. In an interview, he said, “I can just attend online classes, that’s what they’re for.” He was last seen heading into the bushes diagonal to the bus garage, supposedly on a mission to find himself.

While some thought this was just a fun way to get spirits up, Mr. Gasparini had other plans. Apparently, “All I Want For Christmas Is You” is not just a song but “a lifestyle.” Aside from the brand deal he made with Columbia Records to make up for budget cuts, Mr. Gasparini believes that there are many benefits to having the song constantly playing. In an interview, he told us, “Students will be so focused on the song playing that they’ll forget all of the stress they’re having. The counseling department’s request to lower the amount of homework given was absolutely preposterous, so we at the Main Office had to take things into our own hands.”

While this certainly isn’t textbook and may not even be legal, we can’t say he’s wrong. I myself have forgotten all about not understanding sig figs and have just accepted that my soul has been sold to Mariah Carey. I, unfortunately, was not able to get any more interviews with students due to them leaving the building as soon as possible or being in a coma-like state murmuring lyrics every so often under their breath.

Josephine Dupuis - October 20, 2020 0
While it may not seem like we’ve been hit with it yet, when asked if they’d purchased their own, approximately 82.7 percent of students and staff said they had, but are still waiting for theirs to arrive from New Zealand.