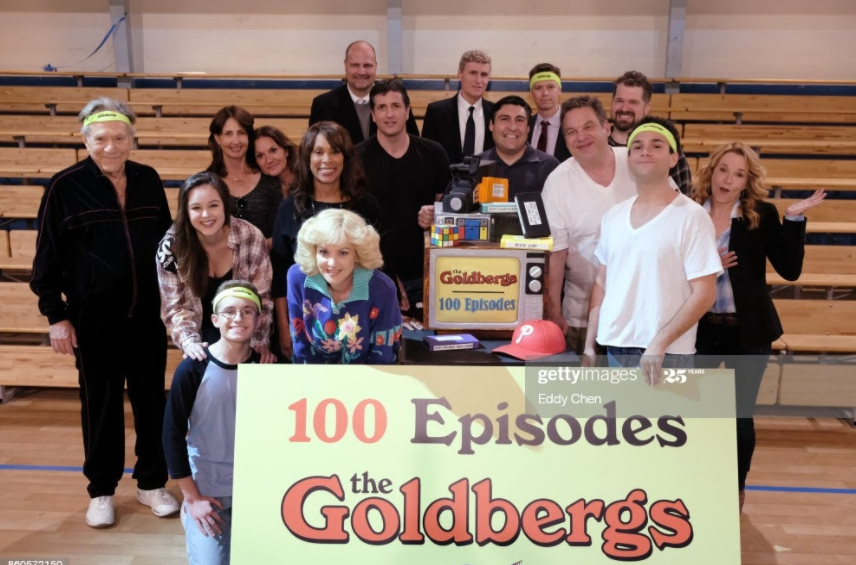 ABC’s “The Goldbergs” deserves recognition and some time in the spotlight.  It’s my favorite show of all time and I believe it will be yours as well.  You may have heard of it thanks to its respectable success among viewers.  It scores a solid 8.1 out of 10 on IMDb and an impressive 86% viewer score on Rotten Tomatoes.  While the show averages roughly six to seven million viewers per season, it is not as well known as many mega-hits like “The Office” and “Stranger Things.”

So what is “The Goldbergs?”  It is a sitcom about a Jewish family which takes place in a Philadelphia suburb called Jenkintown in the 1980s.  The show is based on real-life experiences of the producer, Adam F. Goldberg, and his family growing up.  It is heavy on the humor and pulls greatly from ‘80s stereotypes.  Popular movies from the time are commonly referenced, yet it is relatable to teenagers now.  Philadelphia-area sports teams, malls, and stores like Wawa, Spencer’s Gifts, and Hot Dog on a Stick are also referenced.  The show is narrated by Patton Oswalt, who plays the role of adult Adam Goldberg looking back on his childhood.

The loveable main characters make the show fun to watch.  Beverly Goldberg is the stay-at-home mother of the family and is affectionately known as the “smother,” as she is likely the most loving and embarrassing mother of all time.  She swears and yells a lot, but not in a mean way.  She insists on family get-togethers and is very sentimental.  She is very particular and stubborn, but everything she does, she does for her family.

Murray Goldberg is the father.  He is the polar opposite of Beverly in many ways.  He likes to spend his time sitting in his chair, eating, and watching TV.  When he isn’t lounging around, he is working at the discount furniture store he owns.  His most well-known trait is his affinity for calling his children (and everyone else) morons, albeit in a loving manner, often while yelling.  While he talks a big game about not bailing his kids out of trouble and about how he never wants to be bothered in his chair, he can always be counted on in a pinch.  He enjoys watching TV shows and sports, and is known for “dropping his pants at the door” as he likes to not wear pants whenever possible.  Unlike Bev, he is not sentimental, but there are many moments when you can see just how much he loves his family.

Albert “Pops” Solomon is the grandfather of the children and the father of Beverly.  He is the constant source of fun for the youngest son, Adam.  He is very relaxed around the kids and he spoils them often.  He lives in the moment and is the epitome of cool.  He likes to cause trouble, but never takes things too far.  He gives great advice to the children and helps shepherd them through their teenage years and is loved by all.

Adam Goldberg, the real producer of the show, is the youngest of three children.  He is basically the classic nerd.  He is very thoughtful and kind, but can be funny when he wants to be.  Unfortunately, he often also is funny when he does not intend to be.  This has gotten him picked on, although he has become more cool in recent seasons.  Adam is a hardcore fan of all movies except horror ones.  He loved to play with toys in earlier seasons, but now that he’s grown up a bit, he enjoys spending time with his popular girlfriend, Brea.  He also loves to play video games, both at home and at the arcade.

Barry Goldberg is described in the first ever episode of the show as “the textbook middle child.”  He is known for one thing: his anger.  He is able to clearly express his emotions, although never in an unhealthy way.  He is the funniest character in my opinion.  He comes off as dumb in many situations, but he is actually surprisingly book-smart.  He often makes fun of Adam for his geekery, but this is always done in jest, and he sometimes plays games with Adam.  He is known to be overconfident.  He likes to play sports like wrestling and hockey, hang out with his group of friends, the Jenkintown Posse (JTP), and make rap songs.  He goes by the nickname, “Big Tasty.”

Erica Goldberg is the only main character who is not a real person.  She is based on the oldest brother of the real Goldberg family, Eric.  Erica is often moody and indignant.  She was among the popular crowd in the earlier seasons of the show when she was in high school.  She is rebellious towards her parents and has gotten into minor disputes with the police, such as when she attended an underage drinking party.  In actuality, she is a kind person and has several close friends.  She enjoys making music very much and even dropped out of college to form a band.  When this pursuit didn’t pan out, she returned to college.

Each episode tends to begin with the introduction of a conflict for one or more of the main characters.  Often, each episode will contain two main stories, revolving around different main characters.  Each will have their own problem, with attempts to solve it occurring throughout the episode.  By the end of the episode, after much humor, the problem will be resolved, and the family will be happy.  Each often contains a theme or lesson that can be learned from as well.  While this may sound cut and dry, the problems can be complicated, and it’s always entertaining to see the characters navigate through them the best they can.

In 2018, ABC attempted a spin-off of “The Goldbergs” known as “Schooled.”  This show featured several characters from “The Goldbergs,” but was instead set in the 1990s.  It centered around one of the characters from “The Goldbergs,” Lainey Lewis, who was Barry’s girlfriend for several seasons of “The Goldbergs.”  In “Schooled,” she becomes a teacher at the high school from the original show and faces teaching struggles.  In my opinion, it was a decent show, and while it did also focus on humor, it was incredibly cheesy.  Like many spin-offs before it, it flopped in terms of ratings and failed after two seasons.

I hope this article has inspired you to go watch “The Goldbergs.”  It’s definitely worth a shot.  You will love the humor, the family dynamic, and the situations faced throughout the show.  Season 8 is currently airing and you can watch episodes on Hulu or on ABC on Wednesday nights at 8 p.m.

Is Season Two of ‘Euphoria’ Worth a Watch?

“Squid Game:” the Newest and Biggest Hit of Netflix Yet?