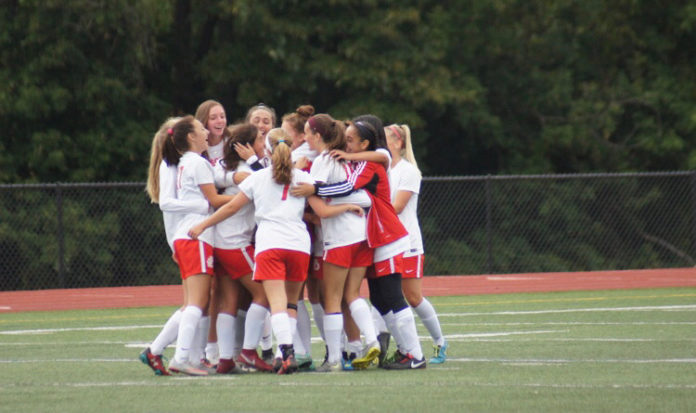 As the Jamesville-DeWitt High School fall athletic season comes to an end, the accomplishments of the student athletes will be remembered. The work that each team put in led to a successful season. There were six teams who won sectional championships, along with some teams extending their seasons into states.

The J-DHS Girls Varsity Soccer team completed a tremendous season finishing 21-1. They won the Class A Sectional Championship for the 10th straight year as well as the Class A Regional title. After making it all the way to the state championship the team fell short against Valley Stream South in over time with a final score of 1-0. The team finished the season ranked second in the state.

The J-DHS Boys Varsity Soccer team finished their season with a 7-10-1 record. They qualified for sectionals and defeated Central Square 2-0 in the first round. Unfortunately, the team lost in the second round of sectionals against East Syracuse Minoa, with a final score of 5-1.

The J-DHS Girls Varsity Tennis team had a record of 13-3 and qualified for sectionals. The team sent eighth grader Tara Pollock to states for singles but she unfortunately lost in the semifinals to a player from Fayetteville-Manlius High School. J-DHS sophomore Inika Gajra and senior Olivia DeHoog lost to Whitesboro in doubles 6-2.

The J-DHS Boys Varsity Volleyball team ended their season 9-10 and qualified for sectionals. Unfortunately, after a hard fought game, they lost against their rivals Oswego, two sets to three.

The J-DHS Girls Varsity Volleyball team finished their season with a record of 13-5. The team won their first sectional game against Fulton in three sets. Then, they went on to win the Class A Sectional Championship sweeping their rivals Oswego in three sets. The season closed with a loss to Burnt Hills in the semi-regional game.

The J-DHS Girls Cross Country team went undefeated this season with a record of 7-0 and qualified for sectionals. The top 15 members of the team were selected to train for sectionals. Along with placing 4th in sectionals senior Sophia Vinciguerra qualified and competed in states.

The J-DHS Boys Cross Country team completed their season with a 4-1 record. After a long season of conditioning and preparing the team came out with a sectional title. They then moved on to the state race where they finished 9th as a team.

The J-DHS Girls Varsity Gymnastics team finished their season with a record of 6-2. They were able to win their 18th straight sectional title. J-DHS sophomore Zoe Potamianos will also be competing in the state meet in February, along with 2 other gymnasts from Fayetteville-Manlius High School.

The J-DHS Boys Varsity Football team finished with a record of 1-7. After qualifying for sectionals, their season came to an end after losing to Carthage 38-15 in their first sectional game.

The J-DHS Boys Varsity Golf team finished a perfect season with record of 13-0. The team went on to win sectionals and some made it to states. Senior Max Schulman, sophomore Tanner Burns, sophmore Peter Hatton and freshman Punn Chittaralert were the four who represented J-D at states.

The J-DHS Girls Varsity Swimming and Diving team ended their long season with a record of 6-1. They won yet another Class B sectional championship. After sectionals 16 girls moved on to state qualifiers. The girls swimming and diving team finished up their season sending 3 relay teams to states which included Emma Galletta, Sawyer Parker, Amelia Hesler, Julia Antoine, Emily Ninestein, and Gwen Lister.

Girls Swimming is Back at Home