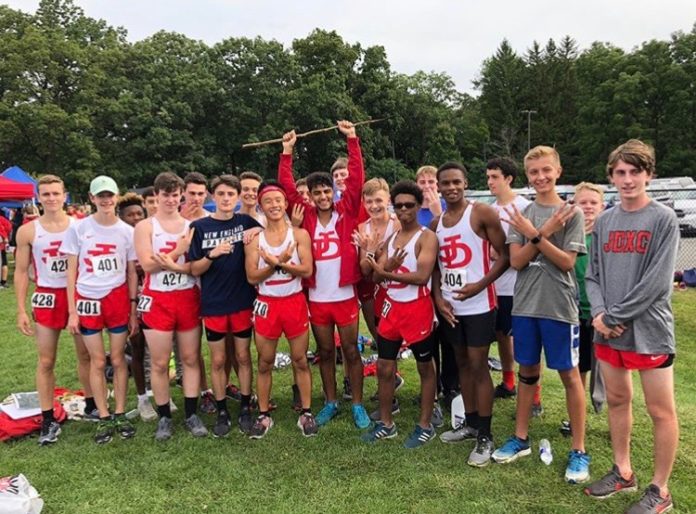 The Jamesville-DeWitt High School Varsity Boys Cross Country team is making strides to finish with an undefeated season. The team hopes to maintain their record of 4-0 and No. 7 standing in the state. “My goal as a captain would be to make sectionals as a team, not just me,” said junior captain Kaleel Boykins.

Boykins emphasized how getting to sectionals is a team effort because they are a very close-knit team and motivate each other to do better. ”The team’s bond is stronger and more cohesive than last year,” stated Head Coach Emily Rowles. While cross country is an individual sport, team bonding has been a key factor for the team’s success with their pasta dinners every Friday night before their Saturday invitational meets.

The team’s motivation is only half of the picture. Success has come with hard practices and drills led by Coach Rowles. She also stresses the importance of mental strength in running. “I’ve been on the team for three years which leads to a lot of personal growth and I am a lot stronger than I was sophomore year, mentally and physically,” said senior Fidel Martinez.

Coach Rowles bases her drills off characteristics she wants to see in her runners such as willingness to improve, a strong work ethic and the desire to be the best version of themselves. “Coach Rowles is very difficult when it comes to workouts. You just got to be ready to work and commit to what’s necessary to get better,” said Boykins. The team knows that these tough practices have produced strong results.

The team has three more meets including one invitational at Whitesboro on Oct. 6 to achieve their goal of the whole team making it to sectionals and maintaining their undefeated record.

Boys Soccer Settles for a Tie in Crucial Senior Night /...