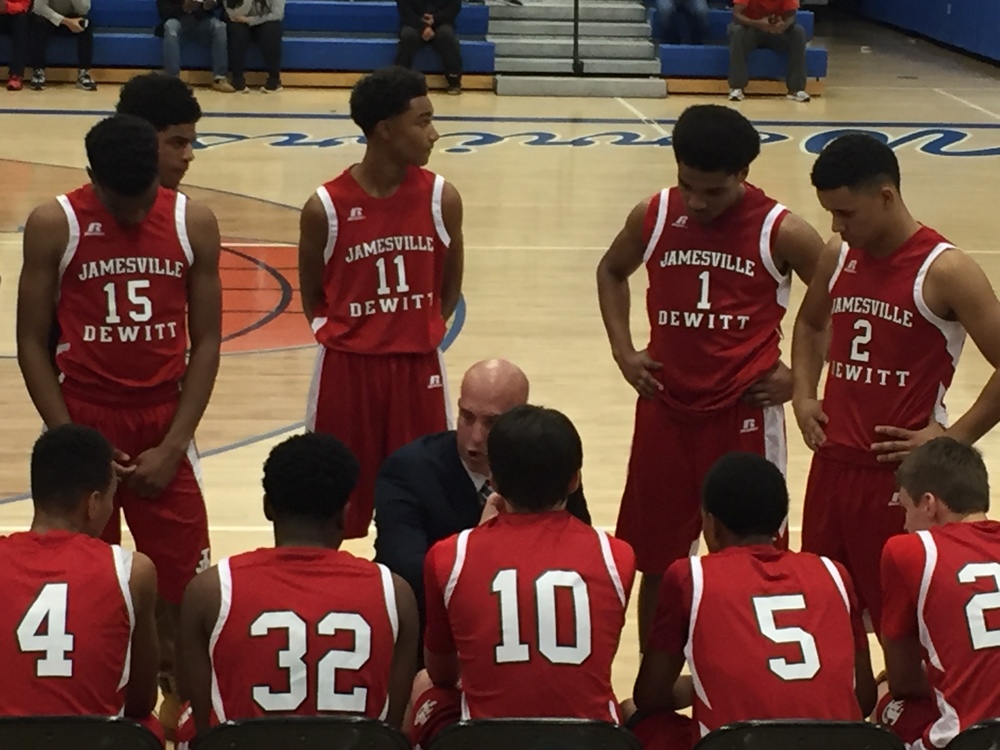 The start of a new season and a new era is under way for Jamesville-DeWitt High School’s Varsity Boys Basketball team. Physical Education teacher Jeff Ike begins his tenure as the new head coach of the Red Rams this season, after three seasons as head coach of the Varsity Boys Basketball team at Manlius Pebble Hill and the freshman boys basketball coach at J-DHS prior to his stint at MPH.

“It is exciting to be a part of,” said Coach Ike. “I’m excited to implement and build on some of the things that I have learned over the years as a basketball coach.” Ike believes that implementing their philosophy at all levels is key to build a strong program. This is something he hopes to accomplish by working with the high school team’s feeder programs, like the Jamesville-DeWitt Youth Athletic Association, and the modified, freshman, and junior varsity level coaches.

“I’m glad to have someone who will keep us disciplined and always have us in check,” said junior forward Terrence Echols. Junior guard Jai Benson agreed with Echols, and added that Coach Ike puts them in their place.

However, a new coach doesn’t change the expectations that the players and coaching staff have for this season. “I’m expecting a good season and having a good shot at a sectional championship,” said senior captain Jimmy Boeheim. “(Winning the sectional championship) is going to be hard, but the boys are working hard and really want to win it,” said Coach Ike.

The Red Rams are off to a 2-2 start so far this season, with close losses against Utica Proctor and Fairport, and a 19-point win at Fowler and a 40-point win over Phoenix.  They will take on Norwich on Friday, Dec. 18 at 6 p.m. at J-DHS’s Main Gym.

The Varsity Girls Swimming and Diving Team Swims Their Way Into...