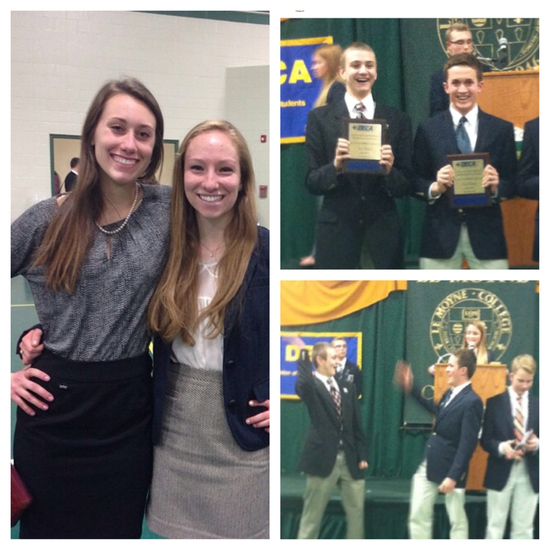 Do you know what DECA is? The Distributive Education Club of America offers students the opportunity to simulate a business meeting with other students at competitions. Although Jamesville-Dewitt High School does not have a full class period designated to DECA, as many other schools do, dedicated students at J-DHS prepared for several months after school and performed phenomenally at this years regional competition that was held at Le Moyne in late December.

“I am so proud of this year’s group simply due to the fact that we had so many first time competitors who far exceeded mine and Mr. Bunyan’s expectations,” said social studies teacher Joseph Ribeiro, who has been advising the club along with social studies teacher David Bunyan for the five years it has been at J-D. Of the 27 students who participated in regionals, 13 qualified for states. See the full list of awards at the bottom of this article.

Involvement in DECA is a year long commitment, but it’s a choice that most of the members are glad they made. “DECA is the best part of my week,” said junior Brian Cieplicki. This is Cieplicki’s first year in the club and it had helped him develop a deeper love for business.

Since the beginning of the school, year, DECA students have met every Wednesday for meetings and to research a topic they are interested in. Junior Arianna Hege, who is president of the club because she liked what it stands for, organizes these meetings and makes sure everything is going the way it should be. Leading up to the regional competition, which was right before December break, the members prepared by coming up with a business plan to present and taking practice tests. All of this is done after school, instead of in class as other schools. However this didn’t seem to be a disadvantage at the competition.

When it came time to chose a topic Cieplicki and junior Ben Wipper didn’t think twice. “We picked Sports Entertainment and Marketing because sports and business are the most important things in the world and to combine them into one event is fantastic,” said Cieplicki. Junior Junghye Kim, who needed some convincing to join from Hege, chose to research Human Resources because it was an interesting topic and not one that many people did.

The competition is an all-day affair, and those who attend have the opportunity to go to several workshops throughout the day. “The workshops have different presentations and everyone is required to go (and listen) to at least two,” said Cieplicki. When it comes to the contestant’s turn to present, they present their business idea to one or two judges in a room. The judges have a rubric that the contestants never get to see, but they are judged in several different areas.

Those who qualified for states will continue on to Rochester, NY on May 5 to further compete with a new presentation.

The following awards were given to J-DHS at the competition:

Voting on the Turf