RamPage
Home Archive Which Will You Choose: A Night of JDHS Sports

By Spencer Schultz and Scottie O’Bryan 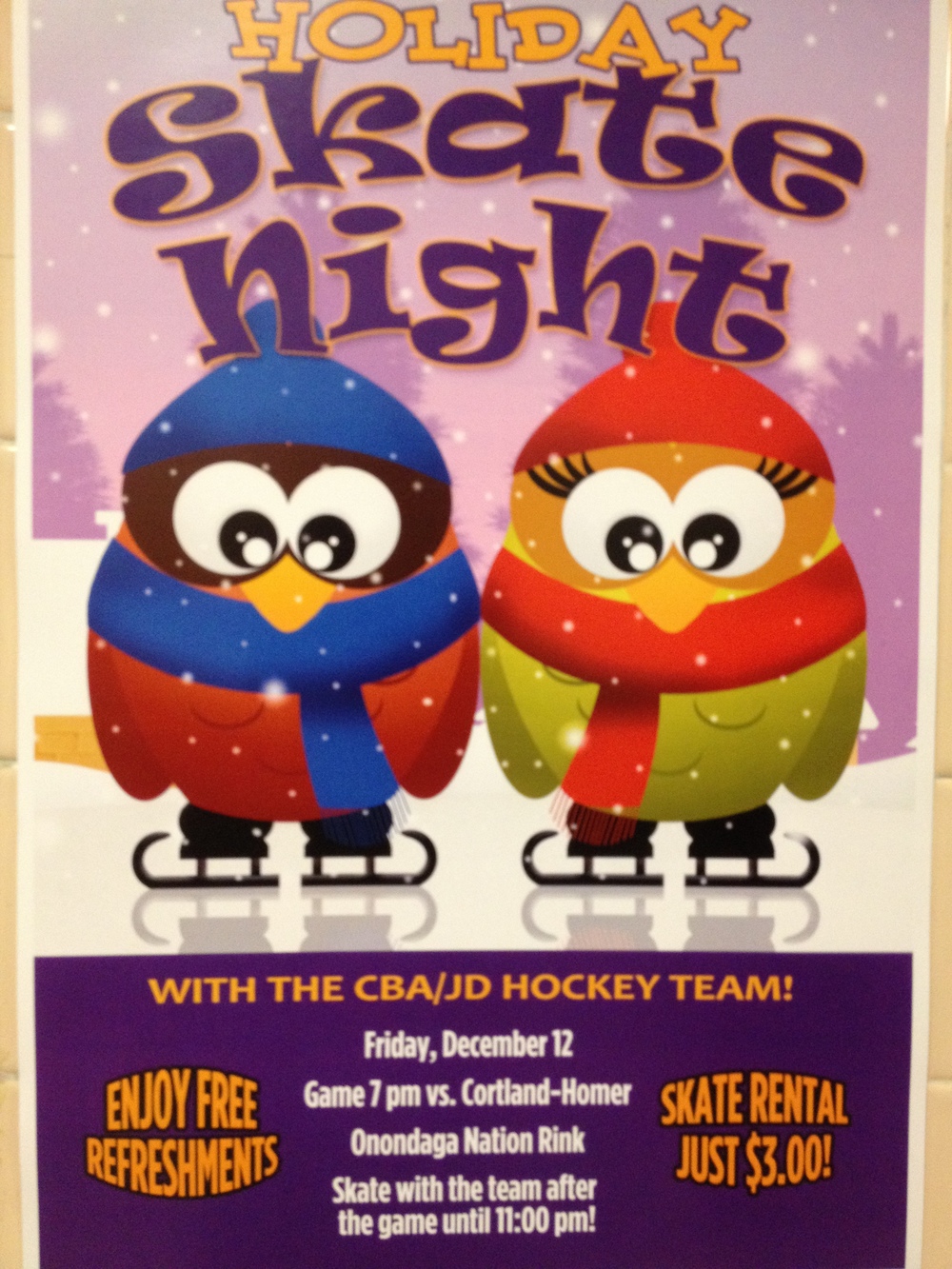 The Christian Brother Academy/Jamesville-DeWitt Varsity Hockey team will host  Cortland at Onondaga Nation Arena on Friday, Dec. 12 at 7 p.m. for a popular event called “Hockey Night,” where fans and players alike ice skate following the game.Typically, the event attracts the biggest crowd of the season. However, there’s a hitch: CBA athletic director Buddy Wleklinski scheduled the hockey game for the same night as the Jamesville-Dewitt Varsity Boys Basketball home game against Bishop.

“I think the CBA athletic director should really rethink scheduling. He is scheduling for more than just his CBA team. We have J-D players on the hockey team as well,” says senior Maria Bussone. “J-D has another huge sporting event Friday night so that was very inconsiderate of him,” says Bussone.

The  rivalry between J-D and CBA has yet to get  in the way of each school’s sportmanship. Senior Varsity hockey player Cole Fowler believes that the scheduling of the two big sports events on the same night was competely unintentional. “We had to have Hockey Night this Friday, because CBA had a basketball game last Friday,” says Fowler.

That said, many J-D students are still bitter about the issue with the scheduling. Freshman Jungyun Kim feels that Athletic Director Wleklinski has “no idea what he is doing.” “It seems like the CBA athletic director is trying to split up the J-D fans, so there are less fans to cheer on the basketball team,” says freshman Katie Lutz.

Mr. Goodson reassures the school that the scheduling was not intentional, but rather a simple mistake. “We try set it up so we don’t have any conflicts, but every year there always seems to be something. Buddy and I just need to do a better job cordinating dates and times in the future,” says Mr. Goodson.

Some J-D hockey players still believe that the turnout at Hockey Night will not be as large as usual. “I think the attendance will definitely take a hit, but hopefully we’ll get a good amount of people,” says hockey captain Ryan Durkin. Durkin feels that the numbers won’t be too low, because CBA fans will still attend the game. Fowler agrees, saying the CBA attendance will be normal, but J-D fans may be lacking.

The hockey team feels that the absence of J-D suporters at the game won’t impact the final score. “Cortland isn’t that good, to be honest, so the amount of fans doesn’t matter,” says sophomore hockey player Jack Austin.

On top of the two big sporting events, the boys basketball and hockey game, J-D has multiple other events that may limit the amount of fans at each game, with the J-D Varsity Boys Swim team hosting Watertown and the J-D Varsity Girls Basketball team traveling to CBA. “Friday should be a busy night in J-D without a doubt. It is going to spread our fans out pretty thin, and they’re going to have to make some choices on where they want to go,” says J-D Athletic Director John Goodson.

The  Varsity Boys Basketball game against Bishop Ludden is to be a very good game according to fans, players, and Mr. Goodson. Ludden’s starting point guard, Mika Adams-Woods, is a former J-D student who played on the J-D JV Boys Basketball team for the 2013-14 season. “I’m excited to see Mika again and see how much he’s improved (from last season),” says freshman Ryan Drotar. Freshman Taku LaClair plays on the J-D JV Boys Basketball team and has a game against Ludden’s JV team right before the varsity one. LaClair looks forward to staying after his game to watch the varsity game. “The game is going be a great match up and I think it will be very close,” says LaClair.

J-D Mock Trial is Far from a Joke